Bamboo and rattan weaving can be said to be a familiar profession of Vietnamese people from ancient to present. To survive and develop, skilled workers have opened many establishments to develop this traditional profession. The following article discusses bamboo and rattan trade villages in the country.

Phu Vinh rattan and bamboo village
This is one of the villages from the seventeenth century of our country. Phu Vinh trade village in Phu Nghia commune – Chuong My – Ha Noi. The village is famous for its handcrafts such as baskets, plates, tables, chairs, etc. With its skillful hands, the village has developed and built many establishments in the district to create jobs. for employees. Passion and love with the traditional craft has been shown on every product of the craftsmen. Therefore, these products are available in many countries around the world.

Rattan and bamboo trade village
Rattan bamboo shoots with more than 300 years of establishment and development in the commune of Tan Tien – Viet Yen – Bac Giang. The village is famous for high quality products such as cushions, pillows, handbags, blinds … The products of the village are carefully preserved artisans and no phenomenon of termite or fade. It is the quality that helped the brand of the village to increase the use of the user.

The village of bamboo and rattan handicraft Ninh Ninh
Ninh So Ninh Bamboo and Rattan is also considered to be the earliest in Hanoi. Ninh So Ninh Ninh Bamboo and Rattan is a famous handicraft village with accessories attached to the farmer with a dewy sun, basket, etc. to catch shrimps and fish. The cleverness and creativity of the local people helped them to live a fuller life thanks to the production of shrimp and fish caught every day during the turbulent and reformed country. However, the country is on the rise, new production technologies are in place, but these are still useful for farmers in economically disadvantaged areas.

The village of bamboo and rattan weaving Thach Cau
The land is considered the father of weaving is also the place where bamboo and rattan survive and develop. Thach Cau bamboo in Nam Truc – Nam Dinh has existed and developed since ancient times. This is a village with craftsmen from 12 years old to 70 years old. With their skillful hands, bamboo and rattan makers have developed products for the labor of the people attached to the fields such as baskets, baskets, baskets, etc. Products of the village have served many people in all provinces in the country.

Ngoc Dong bamboo and rattan
Ngoc Dong rattan and bamboo village in Hoang Dong commune, Duy Tien district, Ha Nam province is also one of the famous bamboo and rattan villages in our country. This is a long-standing village with products not from bamboo as other villages, it is formed from rattan and giang. From these two plants, the craftsmen have skillfully produced products such as rattan chairs, cans, vases, plates, bowls … with many different models and types. The rattan and bamboo industry of Ngoc Dong has brought people here a more stable and prosperous life.

Lien Khe Bamboo and Rattan
Lien Khe Knitwear in Khoai Chau district, Hung Yen province is one of the famous bamboo and rattan export villages of our country. The village was established in the 90s of the twentieth century and developed to this day. The first time to build a career is quite difficult and seemingly impossible to survive. But the occupation of the people here has helped the village survive and develop replication with many small establishments in Lien Khe commune. With the products such as bowls, pots, chairs, mats, … with the model and quality that has attracted the attention of foreign friends. In addition to farming, this is also a job, a major source of income for the Lien Khe people, helping to improve their livelihood.

Bamboo rattan Bao La
Bao La bamboo rattan in Quang Phu – Quang Dien – Thua Thien Hue is proud of producing the most durable and quality of our water. He is the main product of Bap La trade village for many generations. They are close, stick with farmers in the hometown of the country. From raw materials made of bamboo, products such as baskets, nails, sieves, sieves … in turn serve the lives of workers throughout the country. 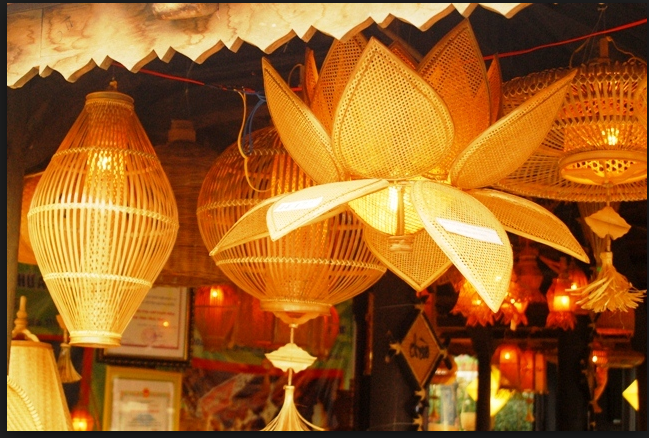